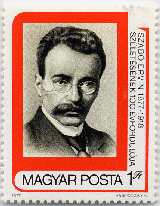 Postage stamps are devices for indicating prepayment of a fee for postal services.  Great Britain issued the first adhesive postage stamp in the world in 1840.  The United States government issued its first postage stamps in 1845.   Postage stamps have developed into a method of honoring and commemorating individuals, institutions, and events.  People are usually depicted on postage stamps because they are famous or they have made an extraordinary contribution to the world or to a single country.  Because of the limited number of stamps which are issued, depiction on a postage stamp represents one of the highest forms of recognition a government can bestow on an individual. Postal authorities throughout the world have also realized that postage stamps which are purchased as collectibles can be a significant source of revenue without the need to provide an actual service.  This has led to the issuing of many stamps which depict extremely popular people such as entertainers and sports figures. The United States Elvis Presley stamp sold more copies than any other postage stamp in history. Millions of these were retained without being used as postage.

People who have worked in a library or made a contribution to libraries have appeared on relatively few postage stamps.  Usually when they have, it is because they made a contribution to society in some other capacity than library work or support.  It is regrettable that more library people have not been honored on postage stamps. Unfortunately, it is an indication of the value which society places on those who work in or for libraries.

The earliest discussion of libraries and librarians on postage stamps was an article by John Boynton Kaiser on "Librarianship and Philately" in Library Journal in July, 1955. Following that article Kaiser and John Henry Richter developed a list of librarians and archivists for an article in Topical Time (the magazine of the American Topical Association) in 1956. John Henry Richter who was the Librarian of the University of Michigan at Ann Arbor and a specialist in stamps relating to Judaica did extensive research on stamps that featured individuals who had worked in a library.  Writing in Norman D. Stevens' A Guide to Collecting Librariana in 1986, Richter discussed his passion for identifying postage stamps which depicted individuals who "at some time in their life, had worked in a library in some kind of professional or non-professional capacity."  He explained that after 25 years of research on this topic, the number of such individuals identified was almost 300.  He went on to say that he had compiled a list of over 1,000 "librarians in waiting" which he checked against new postage stamps being issued.

Some thoughts on lobbying for a United States stamp honoring an American librarian.